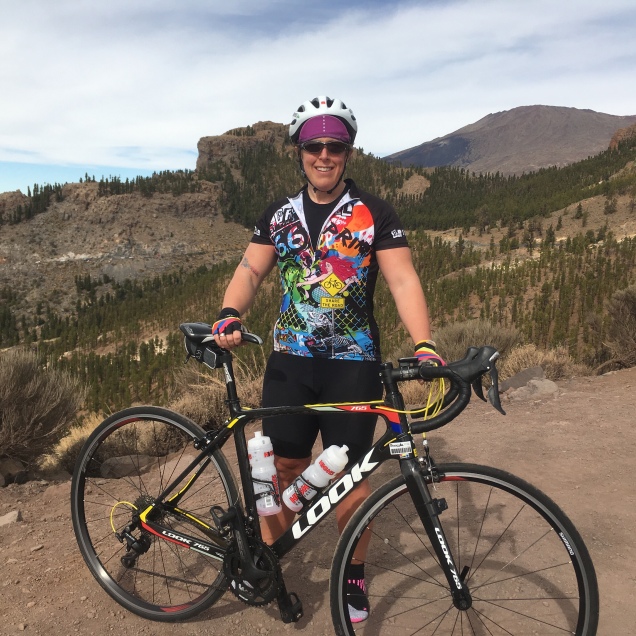 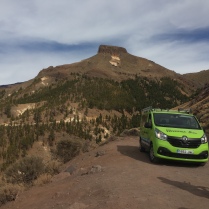 So yesterday I went on a “little adventure” on my bike. Uh eh, we all know what the kind of ilk of Charlie’s little adventures take on. So, I went up Europe’s longest climb, Mt Teide (+2000 metres), in actual sunshine and jersey and shorts. A most welcome break from the current UK weather where I usually go dressed for the Artic.

I was a little apprehensive to start with as many things could ruin a grand day out here. e.g. the weather could distort the view going up, the rental bike could disappoint or not fit correctly, the spd cleats I’d chosen to ride could have killed my feet (still don’t know why I decided that) and last but not definitely least, I’m not really a climber. Such is its length and altitude, the volcano has been one of Wiggo’s and Froome’s key factors in training for big tours.

I went as part of a group with a rental company who organise rides. In the early morning we were garnered from various parts of the island in a mini bus. En route to the shop to collect our bikes everyone seemed to be doing that endurance athlete initiation thing of testing out what the other riders might be like before they even got on their bike. What kind of body shape do they have, are they a triathlete, do they live in the hills, do they live in warmer climes and have actually ridden their bike outside in the past 6 weeks?

We collected our bikes from the shop which were then loaded on top of the minibus and clambered in our cleats ready to get to the bottom of Teide. As we drove I couldn’t help but think “the more we go up in the minibus, the less I am dragging up on my bike”. My fantasising was rudely disrupted by the mini bus stopping at what seemed to me pretty steep. “Uh oh, I’m riding up, from NOW?” Yep.

Then it began, we gently rolled out on undulating roads for 15km before a coffee stop. I say undulating, there was one very steep bit (the 2nd steepest bit of the whole route) where I prayed it wouldn’t be like that the whole way. Cycling in Europe means espresso only allowed. Thankfully that arrangement works for me. An Italian guy riding a time trial bike (!) paid for us all and then promptly headed off upwards. I didn’t see him again.

For the next few hours (no accurate data as didn’t have Garmin holder) I rode upwards only, in the granny gear. The gradient ranged from 6-11% the whole way. Relentless. The views were breathtaking but I don’t have many pictures because if I had stopped I would have dismounted onto a cliff edge. About a tenth of the way up the guide said to me “be patient”. These were words of wisdom, this guy rides this route every week and knew the beast.

And that was how I tackled it. With patience. The whole way. Just sit, suffer and enjoy. I only stopped once for a bar and some salts, otherwise I plodded it out. I’m not used to climbing of any sort really and so made the decision to try and avoid blowing up at any point because I was worried I wouldn’t make it to the top if I bonked. I’m not used to riding my bike with much patience, but it was so the right approach for this one.

I often joke as a cyclist/triathlete that rides, and certainly races, can be defined by a number of words beginning with ‘p’: pee, poo, puke and the worst, p-u-n-c-t-u-r-e (notice how I can’t write it in full?). Sorry for the less than savoury topic. Yesterday, however, I learnt to add a new positive swing to this vocabulary with “patience” and “precision”.

So whilst I had patiently sat it out to the top, feeling (and enjoying) the decrease in oxygen which would give my base miles for the year a big boost, I succeeded with patience and a little precision. The latter needed for handling the bike around the sometimes tight bends. On the way down, however, that duo was reversed: lots of precision and less patience.

Descending was a ball, and one I had waited for ages for. Hours in fact. Some of the group were a little worried, it is pretty high up! I didn’t suffer and enjoyed the thrills, riding down the Black Mountain during the Tour of Wales in very bleak conditions with much more technical sections has taught me well. It was poetry in motion, as I peddled occasionally but mainly just steered and the bike pretty much followed, humming on the tarmac and the mechanics whirring away. Whilst it had been 20 degrees most of the way up, it felt freezing on the way down and I’d forgotten arm warmers or a jacket. A kind lass lent me her arms, an example of cycling camaraderie that had been in full force all day as we adventured together.

As I sit here writing this post ride the morning after I can already feel my heart occasionally skipping a beat. Sounds strange but thats a good indicator of my fitness because that usually means my resting heart rate is somewhere around 41bpm. Usually I notice the beat skipping starting in April/May time as I start putting longer miles in but it seems Teide has served me and my pre-season very well.

If you are a cyclist of any guise, give it a go. It’s definitely one for the list. The views, alpine smells, clean air and descent all make the suffering well worth while. Oh and the rental bike, a Look 765 was the comfiest bike I have ever ridden. It’s not that expensive (relatively for a cyclist) and so this mornings coffee break may find me on Ebay.

Off for a steep hill run now around Los Gigantes. Ride and live well comrades.