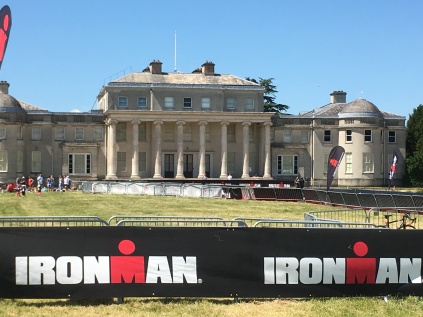 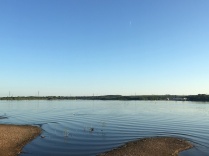 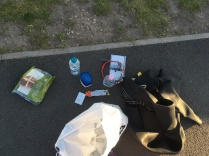 Pre-race: It’s 05.02 am, having been awake since 03.30am I am now waiting on the shuttle bus ready to move like cattle down to the lake for a 7.15am swim start (in the elite wave). Sitting at the very back, as usual. The slightly rebellious triathlete coming out. Writing this is proving a necessary distraction. I’m surrounded by a 100 or so other athletes in this just one space and I quite frankly don’t want to hear what time they’ll be having their caffeine gel, what pace they will set out and when they will be going to the porta loo. This doesn’t usually bother me as I normally have headphones and a coffee. I have neither and so I’ll just have to be irritable (again). It’s like a noxious concoction of sugar and caffeine, anxious farts and nervous energy.

I guess what’s bothering me as I inhale these fumes is the usual thrill of endurance racing and especially triathlons, knowing that so much can go wrong during a relatively long period of time (several hours, up to 15) and the majority of that not going wrong or it being fixed is down to one person. Yours truly. Yet if it goes right then the endorphins later will be mine and Team Charlie’s.

Anyway, spirits up, the weather is looking like it’s going to be the hottest day of year. Racing in the heat bothers a lot of athletes but doesn’t usually bother me. Last year at Stafford it was rain and a mud fest, that really didn’t suit! Time to enter T1 now, one final bike check, bike computer on bike, eat 2 hot cross buns and a gel, wetsuit on, text my dad happy Father’s Day, shed a tear at the national anthem and then GO. Turn it up!

Post race: I suffered very badly out there today, much worse than anticipated! 1st in swim, 4th on bike, 14th on run and overall. I had clear traffic out in the swim, and felt a bit like royalty in elite pen next to the pros, but on hindsight ‘I boiled in the bag’ and the dehydration then ruined the rest of the race. During the swim I got kicked in the eye, that was a first, but thankfully I didn’t lose my goggles (or contact lenses!). I then had a solid transition and was out on the road in good time to only just start suffering. At mile 33, I got off and had a “I can’t” moment – someone who has helped me enormously knows all about those since I’ve told them I can’t do even the most mundane things over the past two years. Anyway, they weren’t there and I didn’t have a phone. My back was hurting, I was feeling lethargic and I was just uncomfortable. I got back on my bike and plodded on, knowing my efforts were all going downhill. I had only seen one other female go past me at that point but knew I was heading for torrid times. With the rolling hills and heat by the bit of climbing at 45 miles I was in bits. Eventually I made it to transition, with a worse time than last year. Transition two was also slow as I sat there in a boiling hot tent for two minutes dreading the thought of running 13.1. miles in 30 degrees. Soon as I was out of transition the struggle become even more apparent. I was needing full sugar coke by mile 2, something that I usually save until much later in the run and sometimes try to avoid entirely. It was just an oven and I couldn’t get enough water, even with stops less than two miles away each time. I don’t like being defeatist but I knew I was rapidly losing places so I ran when I could, jogged when I could and walked when I had to. The latter of which was pretty often. I was absolutely soaked in water from standing under pipes but still couldn’t get the body temperature down. I therefore decided very early on in the run that the day’s mission had to be a “get a medal and a t-shirt and avoid the medical tent” job. I want to go as fast as possible, preferably all the time, but I also know when to listen to my body, admittedly that isn’t very often but I also knew I’d had a crazy few weeks of work and had lost an enormous amount of sleep. That all said, I finished and still got the racing high driving back home south having had 400mg of caffeine in about 40 minutes. Sometimes you are proud to do what you can do. Today was one of them. 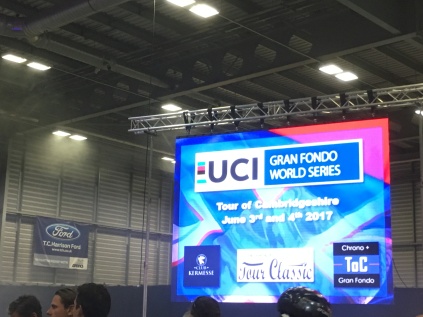 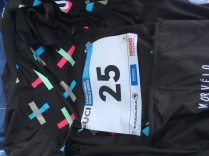 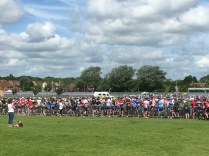 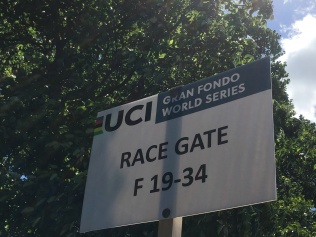 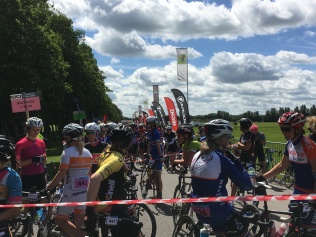 This was my first ‘Gran Fondo’ race, 79 miles racing around Cambridgeshire. I have ridden sportives for years but never really raced a bike over that distance without a swim before or run after. I was quite excited at the prospect of racing with 8500 others, on the flat and not just plodding along to get around. It also seemed a nice distance, stopping 20 miles before a tonne and when fatigue starts to develop quite substantially.

I was in the female 30-34 ‘race pen’ and this was perhaps my down fall. I was dropped from the peloton very early on (why do I never warm up properly?) and then spent a good 45 minutes out on my own in the wind, waiting for another peloton to come along. Anyway, soon they came in their hundreds and I managed to tag along into a train. All on. I had set myself the target of keeping to 20mph as this would get me home in about four hours and last years’ slowest time for a world champs place was 4 hr 13 min. I had worked that out in December 2016 and trained with that goal. However, sustaining that pace wasn’t proving easy, I was having enormous foot pain from about 15 miles in. Unlike never before. Tears of agony were streaming down my face at one point and I had to keep unclipping and pedaling with one foot for as long as I could maintain reasonable cadence. Anyway, once in a group I picked it up. Got to 50 miles, now firmly onto my 20mph average. Sugar level wasn’t doing great, especially as one of the gels in my pocket had gone off (repulsive!) and I wasn’t planning on any feed station stops. The best I could do was keep forcing in my favourite powerade energy drink. Around 66 miles I had the last of my gels, it wasn’t enough but inspired by still holding the required average I had a big moment and realised the next 13 miles could be some of the biggest I have ever ridden.

With the gauntlet firmly laid down I decided to go all out. A kind guy could see what I was trying to do and that I was shifting fast and said to me “you just get on my wheel and stay there”. That lasted for about 5 miles or so until we got separated but it was a big help. Inside the last ten miles I was hurting, really hurting but I was also really motoring along and over took several of those in my age group. I was starting to believe. I could see baring mechanical I would be home in 4 hours and I gave everything I have ever owned to get that bike home in that time. Made it in 3 hr 56 minutes. Although I was dead chuffed with that time as it was way more than I would have achieved last year, I knew the poor start had let me down and I also knew that the quality of the field had gone up dramatically from last year. I waited for the results very ambivalently and sadly I hadn’t quite made it. I was just ten minutes away from qualifying for a world champs place. I was gutted, only blaming myself for accepting unconditionally last year’s target. I had such a fantastic time though, this was also my first UCI organised event and it didn’t disappoint. With 400 people working on the event they did an exquisite job, just what one would expect from the UCI, but still, an athlete is always grateful when things are perfectly organised and they can just ride. I know there’s more in me though and I have already signed up to try again next year. Once triathlon season is over I am sure I can make some big gains during the winter just as I have done during winter 16/17.